At 7 a.m. on November 25, 2011, Libby Naylor, a Vancouver Island dressage trainer, and Heather Tryon were heading north from Errington, BC, trailering two horses to a Bonny Bonello clinic in Courtenay, BC. They were just ten minutes from home when disaster struck.

Without warning, Libby felt and heard a bang from behind and experienced a surreal moment when she saw a horse trailer without a tow vehicle passing her on the right side of the truck.

“Oh my God, Heather!” she exclaimed, “It’s somebody’s horse trailer!” Suddenly she realized it was her own trailer that had detached from her truck. 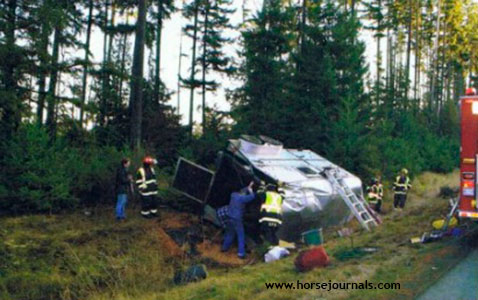 The trailer hit the side of the truck, sending Libby and Heather spinning as Heather desperately clung to Zoula, Libby’s beloved dog. Libby gripped the steering wheel in a hopeless effort to control the truck as it spun across the median, finally coming to rest in a south-facing position.

Then, as Libby and Heather watched helplessly, the horse trailer spun around, slammed into the bank on the side of the highway, and bounced before slamming down again on its side. Libby and Heather leaped from the truck to see to the horses and found them tangled in metal. The two women were unable to determine the extent of the horses’ injuries, or extract them from the trailer. Just then, a man ran up to them saying, “I am really sorry! It’s all my fault; I only looked down for a second.”

That second was all it took.

The Qualicum Beach Fire Department, whom Libby and Heather cannot praise enough, was the first to respond to the accident, followed by other emergency vehicles. Meanwhile, Heather called a neighbour to bring her horse trailer in the hope that she could get the horses home once they had been removed from Libby’s trailer. She also phoned a local vet who responded immediately.

When the firemen opened the trailer, Guinness was curled up in a ball moaning while Ritzy reached down with his nose to comfort him with sounds and gestures, an act that moved many bystanders to tears.

With Libby and Heather’s guidance, it took one-and-a-half hours and careful cutting with the Jaws of Life to remove the metal entangled around Ritzy. Once free of the metal, the young horse struggled out of the trailer and actually leaped over the ditch on the side of the road in his eagerness to be free of the trailer.

The fireman now tried to bring Guinness out, but he would not stand up. This proved to be too much for Libby and Heather, who went over to the truck out of sight of the trailer, terrified that the horse would never stand again. The firemen slowly hauled the gelding out with ropes, but even once he was out of the trailer, he would not move. Eventually, he slowly began to uncurl and finally made it to his feet. Many tears flowed freely at this point.

Miraculously, both horses appeared to have escaped serious injury, although if bruising showed on horses, there is no doubt that the two would have been covered from head to toe. It was now time to get them off the highway and home to properly assess the damage. Heather’s neighbour had arrived with the trailer, and unbelievably, after all the two horses had endured, they walked right into the trailer. 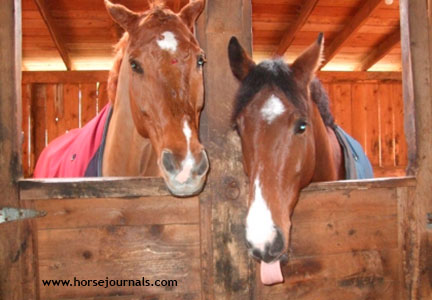 It wasn’t until the horses were home and safe in their stalls that the magnitude of the accident began to hit Libby and Heather. Their greatest concern had been for the animals, but it was clear that both women had also suffered great trauma.

Back at the accident site, both the trailer and the other driver’s vehicle were totaled, while Libby’s truck had sustained major damage but was repairable.

Examination of the trailer revealed hoofprints on every wall and the roof, indicating just how much the horses were tossed around inside.

Fortunately, Libby is extremely cautious when it comes to trailering, and always applies full-length wraps to her horses’ legs, a practice that the vet says may have saved their lives. Libby also credits her custom-built CM trailer with helping prevent more serious injury to the horses.

With Libby, Heather, the horses, and Zoula the dog home and relatively unscathed physically given the severity of the accident, the long healing process began. Both horses had suffered multiple injuries and were depressed, hanging their painful heads, unwilling to try to move for days. This demonstrated the degree of trauma their heads and necks had endured. But Guinness and Ritzy received the best possible care; Libby and Heather were with them constantly, providing them with veterinary care, massage therapy, magnetic blankets, and love.

Both horses have made tremendous recoveries. Guinness is again ready to perform canter pirouettes, and Ritzy has resumed being a playful youngster.

Advice that Libby and Heather would like to give to those trailering their horses would first be to thoroughly bandage the horses’ legs. In the case of their accident, the bandages likely saved the horses’ lives. Other tips they would offer include trailering in leather halters that will break. “Both horses would have had far more head and neck trauma had their halters not broken,” says Libby. “Extra halters should be kept in the vehicle, as you may not be able to access the tack room.”