We came across an interesting blog by Kate Bradley who is an assistant editor and Hands-On Horseman section editor for Western Horseman . A Texas native, Kate grew up riding and showing Quarter horses in a variety of disciplines, and she also competed in high school rodeo and cutting horse competitions. Recently Kate attended the Horseman's Re-Union in Paso Robles, California and saw first hand the Australian sport of Campdrafting demonstrated to the audience. Here is her blog: 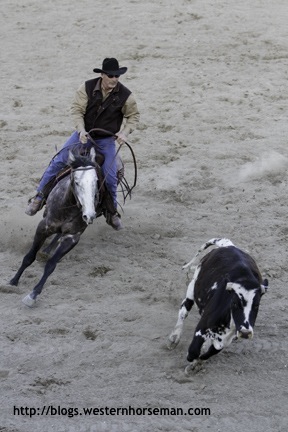 "Friday night at the Horsemen’s Re-Union was jam-packed with entertainment. After riding their colts all day the horsemen were joined by a few local celebrities, like Bobby Ingersoll, and demonstrated campdrafting. In essence, camp drafting combines sorting, cutting and working cow horse, but the pattern resembles a large barrel pattern. After sorting one steer out of the small herd in the pen, the horse and rider must them demonstrate their skill at holding the steer, then call for the gate to be opened, releasing the rider and steer into the arena. The horse and rider then must navigate a pattern including one turn to the right, one to the left and then drive the steer between two markers—all within 40 seconds. Australian campdrafting events are held in large fields with a 2 and one-half minute time limit for the pattern; however, the rules were altered to fit the arena in Paso Robles.

Most favored the Australian riders—Rob Leach, Ken May, Ron Walls and Chris Cox—but none were able to complete the pattern. Instead, event producer Martin Black and hometown trainer Ed Robertson had a ride-off to decide the championship. Robertson rode away with the win!

It was a fast-paced, thrilling event that riled the crowd up for the Horsemen’s Benefit Dinner and Auction that was held later in the evening. Cowboy humorist Baxter Black and Western singer Red Steagall entertained at the dinner. Personally, I’ve decided that campdrafting should be adopted in Texas and I need to participate! " 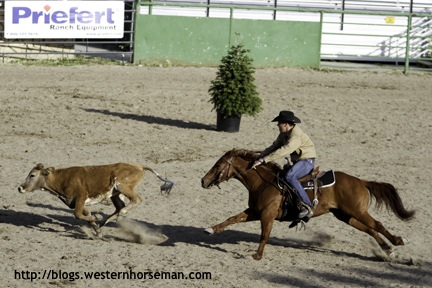 If you're not sure what Campdrafting is you can go to our Campdrafting article. Who knows, Campdrafting just might take off in the US in much the same way that Australian Polocrosse has found an enthusiastic following.