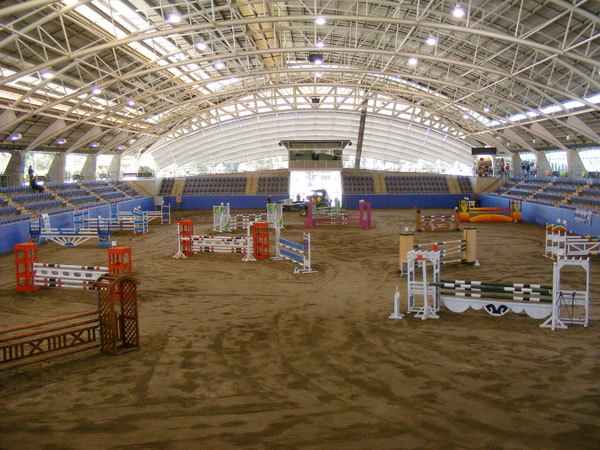 Today most large horse shows will have a ‘jumping' event and of course, the Olympic Games has continued to showcase and raise interest in this sport.

At the beginnings of the sport it was taught at cavalry schools in Italy, Spain, France and Austria.

Understandably they used their existing saddles, which had a deep seat and long stirrups (like a dressage saddle). This meant that when the horse jumped the rider would lean back with their feet forward and pull on the reins. This position was called a ‘backward seat'.
Note the horse's inverted frame and poor technique in the old animation on the left.

The Italian instructor, Captain Federico Caprilli, was responsible for changing the way people rode over jumps. By shortening the stirrups and leaning forward the rider no longer interfered with the horses balance when going over a jump. Today the ‘forward seat' (also called a two-point seat) is universally accepted as the best riding position and has led to the development of specialty jumping saddles.

Competition has developed over the years with each country having slightly different classes and rules, however all international competitions are run under the rules of the FEI (Federation Equestrian Internationale) which is the governing body.

Scoring is based on penalties that are accumulated due to jumping faults and time faults. Jumping penalties are given for knocking down a rail or a refusal to jump. Time penalties are given for each second or part of a second that the rider goes over the time allowed. So at the end of the competition the person with the lowest number of penalty points wins. There are various reasons for elimination but the main ones are if a horse or rider or both fall, and if the horse has two refusals. 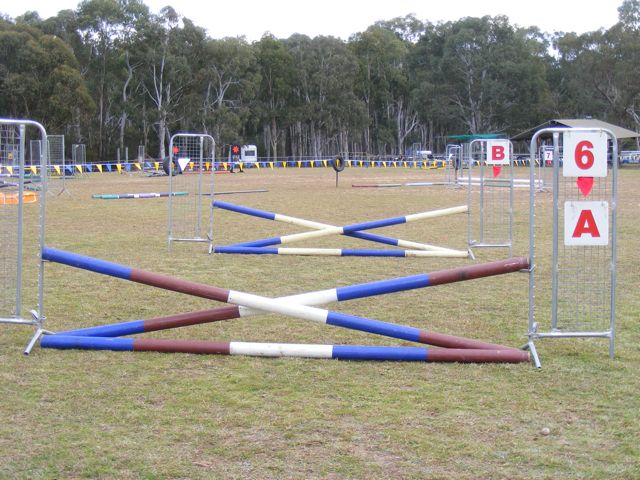 Showjumping fences vary from the most colourful and imaginative at higher level competitions to the very functional at a local riding club. Even though the jump arena may look different there are only a reasonably small number of jump types. You can see some examples on the next page.

Vertical:
A Vertical is a jump that consists of poles placed directly above each other. There is no spread or width.

Wall:
As the name implies, the Wall jump is made to look like a solid object that the horse can't see through. The construction is made of light material that will fall when knocked.

Hogsback.
The Hogsback is a spread fence which has three poles with the centre pole higher than the outside poles.

Cross Rails:
As the name implies the two poles are crossed with one end of each pole on the ground and the other end in a jump standard or cup.

Combination:
A combination jump can be either a Double Combination (2 jumps) or a Triple Combination (3 jumps). They are set in a straight line and can only have one or two horse strides between them. They are considered as the one jump because of their proximity to each other. If a horse refuses the second or third jump in a combination they must go back and jump the whole combination again.

Fan:
The fan has the poles on one side of the jump spread out by standards so if viewed from above it looks like a fan.

Open Water.
The Water jump has a wide ditch of water either before the jump or after the jump. In Showjumping the horse must clear the water unlike the water obstacles in Cross Country were the horse goes through the water.

Liverpool.
The Liverpool jump is either a Vertical or Oxer with a ditch of water underneath.

Filler:
Fillers are not a type of jumps but rather the solid in-fills underneath the poles. They could be flowerpots, decorated planks or any other creative decoration. 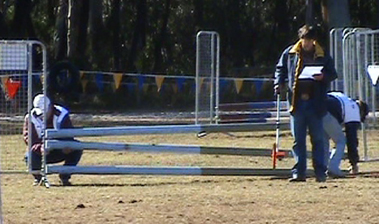 The course designer selects the type of jumps to be used and then lays out the jumps in a way that either makes it easier (for lower grades) or more technically difficult (for higher grades). Before competition begins the riders are then allowed to walk the course (horses are not allowed in the jumping arena before they compete). 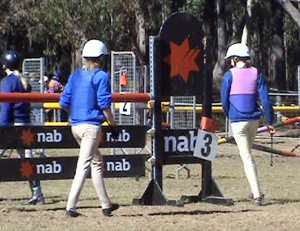 Walking the course is a very important part of the rider’s preparation, where they can make sure that they understand the plan of the course as all jumps need to be jumped in order. The rider will also step out the course between jumps so they know how many strides the horse must take between each jump (the average canter stride is about 12 feet or 3.6metres). At higher grades when the courses become tighter and more technical the rider may decide that they have to take the jump at an angle rather than straight on.

Remembering the correct order you have to take the jumps in can be hard. Take a look at the FEI video animation of the Aachen course below:

All horses can jump… the big question is how high and how well!

At Pony Club level you can start at E Grade and compete successfully on small ponies. As you move up the grades the jumps get bigger and harder so the size and talent of the horse becomes more important.

At Grand Prix level or in open competition the horse needs to have athletic ability and courage to face large jumps. The most popular breeds are Thoroughbreds and some Warmblood breeds. (You can find out more about these horses in our section on ‘Breeds’).

If you wish to get more details about the rules and regulation for Showjumping you should go to your country's official website. In Australia, for example, search in your browser for "Australian Show Jumping Rules'. This will take you to the EA (Equestrian Australia). If you wish to know the international rules, search for FEI.

Note: Show Jumping Classes are very different to Jumping Equitation and Working Hunter classes, where the competitions are judged on calmness, style and/or technical accuracy rather than objective penalties.

If you want to construct a Showjumping course, you will need to consider the space you will need (all courses must be enclosed) and the available materials. This may determine the number and types of jumps you can include. You will want more spreads than verticals and you should have at least two changes of direction.

We have included a number of FEI Showjumping course animations which may give you some ideas when you design your course plan (see the FEI TV Course Design videos below).

All horses can jump… the big question is how high and how well! Take a look at some wonderful showjumping videos below… and find out what a horse sees on a cross-country course.