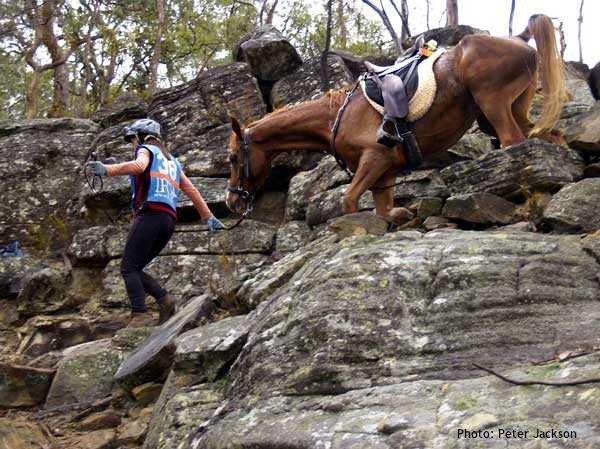 As horses moved from being an animal that was required for work, transport and warfare into a purely recreational animal, so to did the ability to ride long distances move from being a method of transport to a world renowned competitive sport.

The first non-competitive endurance rides were organised in the U.S to help with the rapid expansion of the West during the mid 1800s. Those that took part included Pony Express riders who had to travel long distances to deliver mail, new settlers who migrated westward seeking the promise of new land and the U.S. Army Cavalry who maintained order on the expanding frontier.

Almost 100 years later endurance riding was first organised as a competitive sport. In 1955 a group of American riders rode from Lake Tahoe to California following the old gold rush paths known as the Western States Trail. They rode for the satisfaction of proving that 100 miles (160 kilometres) could be covered in less than 24 hours. This ride became known as the Tevis Cup and is still considered one of the most difficult rides, because of the severe terrain and high altitude of the Sierra Nevada Range.

In 1966 horseman and editor of Hoofs and Horns, R.M. Williams, began working towards creating the Australian equivalent of the Tevis Cup. The committee had a rough time getting their idea off the ground, meeting strong opposition from the RSPCA. However, Professor David Hutchins reinforced the committee’s conviction to carry out the ride with great attention to animal safety. He created an outline by using the Tevis Cup safety standards and researching station-working horses, which were ridden over set distances and times. By doing this, strict veterinary standards were introduced and now govern endurance riding in Australia.

Williams contacted his close friend, Tom Quilty and asked him to help support the ride. Quilty donated $1000 and was rewarded by having the ride named after him. The donation was originally to be used as prize money, unfortunately racing for money over public roads was against the law, so instead the money was used to make a gold cup. Today the original Quilty Cup is a perpetual trophy, which is on display in the Stockman’s Hall of Fame in Queensland. Winners now receive the highly regarded Quilty buckle and the satisfaction of having completed Australia’s most famous endurance ride.

Another ride that has put Australia on the endurance map is the Shahzada. It was named after the famous Arabian stallion that was said to have had a great heart and stamina, allowing him to power through the traditional test rides of 500 miles (804kms) in 1922. In 1925, Shahzada was imported from England to Australia where he eventually retired into the care of R.M. Williams. This endurance ride has been held annually at St. Albans in New South Wales since 1981. It is described as being the longest race in the world, coming in at an incredible 400kms (about 249 miles). It must be completed in five days with a total of 80km and two veterinary checkpoints per day.

With increased popularity in the sport, veterinary standards have been made much stricter in the interest of horse welfare. Throughout the stages of competition, there are compulsory checkpoints so that the horse may be checked over and deemed fit to continue. Even before the horse and rider begins a ride they must attend a pre ride veterinary examination. 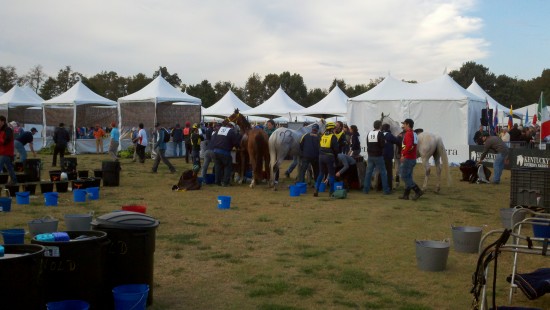 Here the horse must go through three different stages in order to be classed able to compete: The chief steward must first check the horse’s identity and the authenticity of the logbook, which contains all the information about previous rides and experiences. This is followed by the TPR, which stands for temperature, pulse and respiration. Each horse must be tested at every checkpoint without any noticeable abnormalities. The final stage is a visit to the veterinarian who does a detailed examination of each horse and puts the results into their logbook. The results are marked with an A-B (good / healthy), C (showing signs of wear and tear) or D (unfit to race resulting in elimination). There are four main tests that require an A-B result before a horse is allowed to begin or to continue the ride.

Temperature – The horse must have a temperature of less than 38.5°C (101.4°F) before starting. Optimal temperature is usually between 37°C and 38°C (98.6°F and 100.4°F). If a horse has a higher temperature due to excitement then the vet will ask for it to be checked again in an hour. If it has not reduced the horse may be eliminated.

Pulse or Heart Rate – A regular, strong beat of 38-40 beats per minute is optimal for a horse prior to starting. At the final check point the heart rate must return to less than 68 beats per minute after a ten minute rest break. If it does not, the horse’s result will be deemed a level C. If after thirty minutes the pulse has still not reduced to 68 beats per minute the horse will be eliminated. 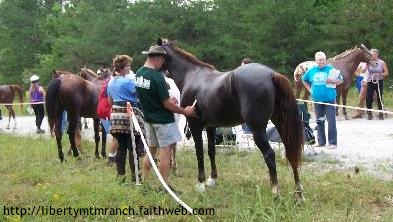 Gait – This is tested during the trot out section of the vet check. Each horse must be led on a loose rein in a pattern chosen by the Head Veterinarian. If there are any signs of lameness the horse may be eliminated or asked to perform a ridden work out for the vet. Shoes are also checked to make sure that they are well fitted and not loose. 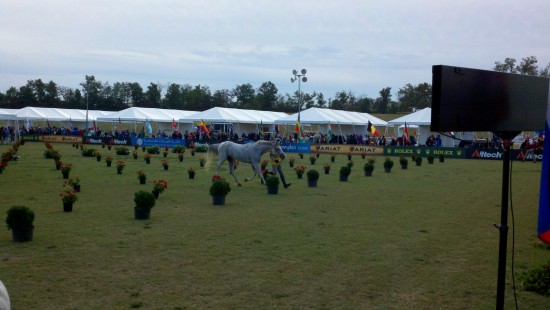 CRI – This stands for Cardiac Recovery Index, which is usually completed at the checkpoints during the ride. It measures fatigue and determines whether the horse will be allowed to continue onto the next leg. It includes taking the horse’s heart rate over a 15 second time frame. The horse must then be trotted out 40 metres and back in 60 seconds. The heart rate is then tested for another 15 seconds. Each result should be within 4 beats of each other. 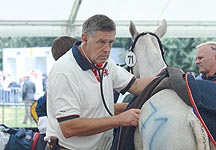 Why are Arabians and Part-bred Arabians so popular?

Endurance races can place enormous stress on a horse’s skeleton, joints, muscles, tendons, respiration and cardio vascular system. Horses are often selectively bred for superior performance over long distances, in other words they are breeding for marathon runners rather than sprint athletes. Arabians and  Arabian part-bred horses are by far the most popular endurance horses due to their distinctive physical attributes. These attributes give them an enormous advantage in these ‘marathon’ rides.

A slower resting heart rates, which allows them to return to normal rates quicker than most other breeds

Muscle fibres, which contract slowly and are surrounded by more small blood vessels resulting in a higher capacity and smoother transportation of oxygen

(For more information on the Arabian breed read our article ‘Arabians’ located under the Horse Facts menu.)

Although the Middle East (and more particularly Saudi Arabia) was the birthplace of the Arabian breed, and they have a history of riding long distances, it wasn’t until 1998 that the UAE (United Arab Emirates) embraced the modern sport of endurance. Today, across the vast tracks of sand one of the most famous races, ‘World’s Most Preferred Ride’ (also called ‘The Duel of the Desert’), is held in the emirate of Dubai covering 200 kilometres (125 miles) in two days. Participants from all over the world travel to compete in this gruelling event. The host and primary supporter of the event, the Crown Prince of Dubai, Sheikh Mohammed, competes alongside his four sons and wife, two of whom have been known to tackle the ride on Australian bred Arabian horses. 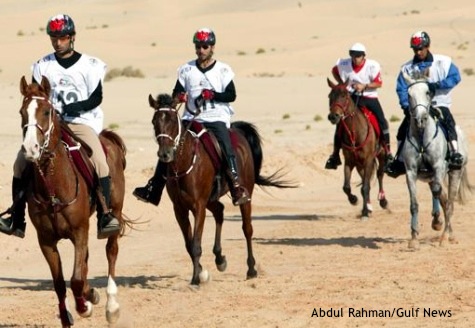 These long-distance rides have inspired many fictional books and films, including the Black Stallion series and the Disney film Hidalgo. Hidalgo narrates the journey of an American cowboy on his faithful Mustang trying to cross the desert. It just goes to show that ‘you don’t have to have an Arabian to compete, but you will have to pass one if you want to win!’ – AHSA (Arabian Horse Society of Australia).

Note: Not all Arabians are bred for high-performance endurance work, so care must be taken if you are purchasing a horse specifically for long distance racing. You should seek independent expertise as well as rely on a veterinarian who specialises in this area.

Where is endurance heading?

In 1982, the FEI (Fédération Equestre Internationale) accepted Endurance riding as one of their seven recognised disciplines. The other disciplines include Jumping, Dressage, Eventing, Driving, Vaulting and Reining. Acceptance by the FEI resulted in a steady increase in the number of competition rides growing from four to 18. In 1998 the World Championships were held in Dubai (UAE) with 47 National Federations competing. This resulted in a rapid acceptance of the sport and the growing participation that it enjoys today. The FEI events, which include Endurance, are the World Equestrian Games (WEG), World Championships as well as various Continent Championships. 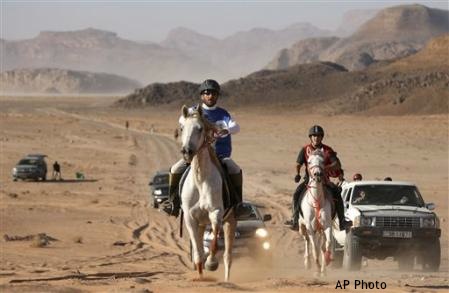 The FEI along with AERA (Australian Endurance Riders Association) and AERC (American Endurance Riders Conference) have been lobbying the IOC (International Olympic Committee) to include Endurance Riding in the Olympics.  As yet their requests have not been accepted but there is hope that the sport may be included as a ‘demonstration’ event in the future. 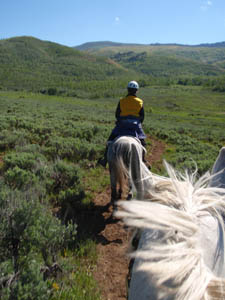 Regardless of these Olympic aspirations all the national endurance associations have continued to ensure that this sport reaches its full potential. Their aim is to protect and develop all aspects of endurance riding, including, horse and rider safety, nature preservation and the unbreakable bond between man and horse. They have also worked at making this sport very accessible to all levels, offering novice and training rides to first time enthusiasts. They can range from 20 km rides to overnight treks. Anything above 40km is considered a competitive ride.

With the emphasis now being on the horse finishing in good condition rather than on who finishes first, it is a sport that the whole family can enjoy, whether they ride or act as the support team for others.

Some great videos on endurance riding, including one on the vetting process that takes place before every race.